Dear Lord, I really can’t believe I’m writing any of this.


There were some interesting developments in terms of style and substance at last night’s GOP debate. But there were also three moments best dealt with on their own.  Two were some absurdities of a candidate’s own making (guess who?); the other, a case of the Interwebs going crazy with silliness.

First, there was this: Who needs a massive audience to reassure him that his hands aren't small at the start of a Presidential debate?! Donald Trump, that's who.

In addressing his first question during the live debate, Donald Trump starts flashing around his hands, asking, “Do these look like small hands?”  He then assures us, the viewing audience, that “there’s no problem” with the size of “that other body part” – you know, the one said to correlate with a guy's hand and foot size.


Notice that, at first, the crowd is laughing and cheering, and then dissolves into choruses of boos as the shock wears off among the folks who aren’t die hard DT fans.

Apparently the whole tiny hands thing started with a silly dig that former Vanity Fair editor Graydon Carter enjoyed taking at Trump in Spy magazine.  Carter started calling him a stubby fingered vulgarian in 1988.   As is Trump's wont, he took the silly jab personally and started obsessing about it.  To this day, 28 years later, Trump still occasionally sends Carter some photo of himself with the hands circled and a note saying something like "See! Not so short!"

And that's really the most troubling aspect of the whole thing - he *still* dedicates bandwidth to a silly insult.  And still harbors an intense grudge against Carter for it that has led him to mean tweet Carter every now and then for the last several years.  And still has to send magazine tear sheets to Carter every now and then with pics that he believes indicate that his fingers are not so stubby, after all.  And has to open a national, live, televised debate for President of the United States by refuting the notion that his hands are small because Marco Rubio cracked a joke about Donald's obsession with his hand size.  Thus proving Rubio's point - Donald Trump is absolutely obsessed with a 28 year old, silly taunt about the size of his hands.

To me, Trump's ridiculously thin-skinned defensiveness and his obsessive hatred for anyone who says anything about him that is less than adulatory is a much bigger cause for concern than the fact that he just defended the size of his equipment in a Presidential debate.  But yes, that was pretty damn icky, too.  Plenty of folks were down-right appalled.  Fox News contributor and right-wing pundit Bernie Goldberg, for one, was not amused at the post-debate show:

My favorite parts are when you can hear Chris Wallace audibly sighing in disdain at Trump's sprinkling of Little Marcos (around 0:10) and when the crowd turns on Trump and starts booing loudly.

Third – and of all the damn things, this seems to be what is blowing up Twitter today – something white appeared on Ted Cruz’s lip, then disappeared, and then the Interwebs decided it was a booger.

So let’s clarify things here: NO, Ted Cruz DIDN'T eat a booger on live TV.  One friend noted that the thing that appeared on his lip looked like a piece of a mint, and she’s right.  A mint or a throat lozenge would seem to make the most sense.  Whatever it was, it was far too big and far too white to be a booger.

Not convinced?  Watch the tape.  When you watch the close-up, slow-mo version (above) you can see that the object dropped out of his mouth (it looked like it had been between his top lip and his top front teeth) and onto his lower lip.  You can also see that it definitely isn’t a booger.

C’mon, America!  This isn’t a race for 7th grade student council.  We’re electing the leader of the frigging Free World here.  There are PLENTY of perfectly valid reasons to support someone other than Ted Cruz.  So let’s dismiss the #boogergate silliness and move on.

The Trump thing, on the other hand (accidental pun noted), actually did happen.  So if you want to be grossed out and embarrassed by a spectacle from last night, focus on the one that actually happened:

PS: A lifestyle writer at British Paper The Telegraph had a lot of fun with the stubby fingers story about a month ago. 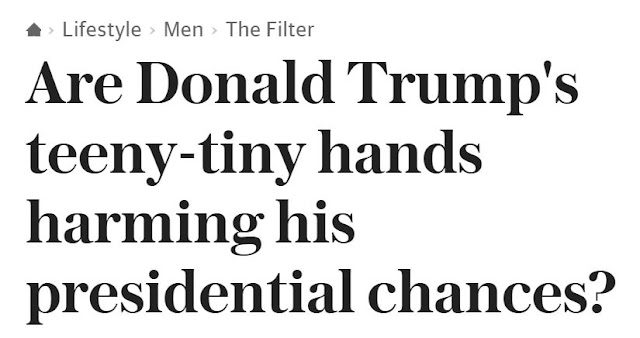 PPS: Like John Oliver said on Sunday, there's really nothing wrong with Trump's hands, but the fact that he's so sensitive about it is absolutely hilarious.  And, I'd add, troubling.

PPPS: If you have 21 minutes, watch the John Oliver clip - a perfect, entertaining, and substantive take-down of Trump.