Avoiding Trump Like the Plague, Netanyahu Cancels US Visit 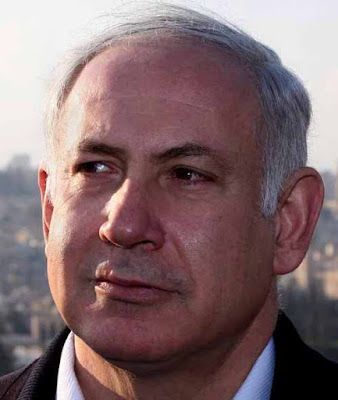 Israeli Prime Minister Benjamin Netanyahu was slated to come to Washington, DC to address the annual convention of the American Israel Public Affairs Committee, or AIPAC, in two weekends. Netanyahu was also to meet with President Obama while here, a meeting that Israel had sought and The White House had scheduled for March 18.   Now the Prime Minister's Office states that the trip has been cancelled. The White House meeting will not occur, and Netanyahu will speak to AIPAC attendees via satellite.

Plenty assume that Netanyahu's scheduling change has something to do with "frosty" relations between Likud-run Israel and the Obama Administration. Some scoff at the reasoning given by Netanyahu's office. I don't.

I'm reading the scheduling change as Netanyahu avoiding being in the same country as his "good friend" Donald Trump right now.  If true, that would make today an even bigger day for Trump and satellites.
Per CNN today:

"The Prime Minister decided not to travel to Washington at this time, at the height of the U.S. primary elections," the Israeli official said. ... Several 2016 candidates are expected to speak at AIPAC and had requested meetings with Netanyahu -- a scenario that could appear like intervention into domestic politics.


Meeting with any of the Presidential contenders would only be perceived as intervention into US politics if Netanyahu agreed to meet with some candidates, but not others.  The easy fix? Simply decline to meet with any of the Presidential contenders while here.  The justification is easy enough – time constraints and meetings planned with the current administration simply wouldn’t permit him to meet with all six candidates still in the race.  But for some reason, Netanyahu's team didn't just go that route.
The Times of Israel reported last Thursday that Netanyahu was weighing possibly begging off the trip, in part because Vice President Joe Biden was travelling to Israel this week (he arrived today) and because President Obama wasn't available closer to the March 20 AIPAC conference start date as he's departing for Cuba on the 21st. The reporter also speculated that "Netanyahu might also want to avoid being in the awkward position of having to meet with some presidential contenders while ignoring others."

Which brings me to Trump. That man's behavior when he feels he’s owed something is what leaves me thinking the schedule change is at least partially about the Donald.

Trump and Netanyahu have more history than Donald has with most of the folks he declares are his “good friends.”  In 2013, Trump even recorded a commercial in support of Bibi’s campaign, the text of which Trump clearly came up with himself:

You truly have a great Prime Minister in Benjamin Netanyahu. There’s nobody like him. He’s a winner, he is highly respected, he’s highly thought of by all and people really do have great, great respect for what’s happened in Israel. So vote for Benjamin — terrific guy, terrific leader, great for Israel.

Between waffling on recognizing an undivided Jerusalem as Israel’s capital (long the GOP’s preferred loyalty-to-Israel test), advocating to ban all Muslim immigration and visitors to the US (which Netanyahu firmly denounced at the time, causing Trump to postpone a planned Israel trip), ridiculing prisoners of war, demonizing foreigners, the eerily familiar cult of personality mode of campaigning, and most recently, flip-flopping on whether he’d disavow David Duke or the frigging KKK, I wouldn’t be surprised if Prime Minister Netanyahu told his people, “Keep me far, far away from that Trump.  G_d willing, the saner Republicans will knock this guy out the race soon and I won’t have to deal with him at all.”

Trump’s epically poor reactions to being told no by someone who he feels owes him something are legion.  Netanyahu would reasonably want to avoid being seen with – or being seen as endorsing – Trump, but would probably also prefer becoming the next target of an unholy tirade of mean Tweets if he begged off.  I doubt Netanyahu is afraid of Trump’s mean girl antics, but he knows well that it’s in his best interest to maintain favor among US conservatives, and that includes Trump’s supporters.  So best to avoid poking the wasps’ nest if one can.


Who can’t already hear the Trumpian tantrum likely to ensue if, despite best efforts, Netanyahu hurt Donald’s feelings?  You can't help but imagine something like, “I mean, he BEGGED me to do a commercial for him in 2013. He was on his hands and knees. … Bibi is a terrible, terrible leader – he’s really been a disaster for Israel.”

So is Netanyahu perhaps avoiding Trump? Did he just decide that with Biden coming to Israel this week and Obama's Cuba trip only leaving him available two or three days prior to the AIPAC conference, maybe a trip to the US wasn't needed at this time? Or was it maybe a bit of some or all of these things. What do you think?