The GOP narrative around Hillary Clinton's State Department emails got an assist from a seemingly unlikely source on Friday: the so-called “Mainstream Media,” in the persons of Washington Post reporters Rosalind Helderman and Tom Hamburger, and Chris Cillizza, who writes WaPo politics blog, "The Fix.”

Cillizza’s take on the story is, as of this writing, in the WaPo Top 5 most widely read pieces: 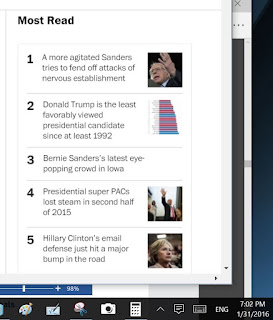 Unfortunately, they all read far too much into far too little.

For months, Hillary Clinton and her presidential campaign have stuck to a consistent story line when faced with of classified information on the private server she used exclusively as secretary of state: She was the victim of an overzealous intelligence community bent on categorizing information as top secret or classified when it was, in fact, neither.
That defense hit a major snag on Friday when the State Department announced that it, too, had found “top secret” information on Clinton’s server — 22 emails across seven separate emails chains. The information, the State Department said, was so secret that those emails would never be released to the public.

Suddenly Clinton’s narrative of an overly aggressive intelligence community or a broader squabble between the intelligence world and the State Department didn’t hold water. Or at least held a whole lot less water than it did prior to Friday afternoon.

Kirby explicitly stated that the classification upgrade was per request from the Intelligence Community, not “the State Department itself.”  This is completely consistent with what Secretary Clinton and her campaign have been saying all along.  A few moments later, Kirby further stated:

These emails denied in full are among the emails discussed recently by the Intelligence Community inspector general in a letter to Congress. We will not, however, be confirming or speaking, as I said, to every detail provided in the documents or in the ICIG’s letter. One of these emails was also among those identified by the ICIG last summer as possibly containing top secret information. [emphasis added]

To be fair to Cillizza, his analysis apparently relied on reporting by two of his Washington Post colleagues, who asserted:

The Friday announcement was significant because it appeared to undercut Clinton’s argument in recent months that she was merely the victim of a bureaucratic squabble between overly strict analysts at the intelligence agencies and more reasonable reviewers at the State Department.

The intelligence community’s inspector general had previously indicated that he thought that some of the emails contained top secret material. Until Friday, however, the State Department had declined to concur with that assessment.

But this isn’t an accurate reading of Kirby’s comments.  In his initial statement and in response to numerous reporters’ questions on Friday, Kirby repeatedly reiterated that State had agreed to upgrade the emails in question at the request of the Intelligence Community.  The only slight deviation from this response came when a reporter asked whether, “you guys [at State] were prepared to release [these emails] until the intel community came in and said hey, wait a second, you can’t do that?”  To that question, Kirby replied:

No, I wouldn’t say – I wouldn’t say that, Matt. As I said we had an ongoing discussion about this traffic with them. At their request we’ve decided to make this upgrade. It is a State Department decision. We’re doing it, but we’re doing it at the request of the Intelligence Community. And we’re going to continue to coordinate and consult with them going forward.

It does seem technically accurate to say that decisions about whether to release documents in State’s possession pursuant to a FOIA request is inherently a State Department decision.  But folks infinitely more expert on this topic than I have generally supported Clinton’s contention that some agencies have a tendency to be overly cautious in making security classification determinations.  And predictably, the overly cautious entity usually wins the day, unless or until the decision is overruled in an intra-agency MDR review or on appeal to the Interagency Security Classification Appeals Panel.

The most recent Informational Security Oversight Office report (at pdf p. 16) indicates that 62% of pages of classified materials challenged by the public via the MDR process were wholly declassified at the initial review stage, while an additional 32% of the pages were at least partially declassified on review.  That’s right: 94% of classified pages reviewed under MDR were wholly or partially declassified in response.  Of the much smaller universe of cases that made it to review on appeal to ISCAP (at pdf p. 26), 75% of the 451 documents reviewed by ISCAP were ordered declassified, either wholly or in part.  These data points would tend to support the contention that some agencies, at least, have a substantial habit of overclassifying materials.

The National Security Archive, a non-profit based at George Washington University, provided this overview of the over-classification phenomenon just a few days ago:

National Security Archive director Tom Blanton’s July 2015 Washington Post op-ed further lays out the ongoing problem of overclassification. Blanton argues that “the real secrets make up only a fraction of the classified universe, and no secret deserves immortality. In fact, essential to the whole idea of democratic government is that secret deals with dictators will come out eventually, not least to deter the worst deals from being made…I showed Congress the estimates over the years of how much gets classified that doesn’t deserve to be. Ronald Reagan’s executive secretary for the National Security Council, Rodney B. McDaniel, said 90 percent. Thomas H. Kean, the Republican head of the 9/11 Commission, said 75 percent of what he saw that was classified should not have been.”

Of lesser import – but still worth noting – is Cillizza’s contention that Clinton’s campaign “pivoted” on the email issue, supposedly in response to the comments from State:

The Clinton team quickly pivoted. “After a process that has been dominated by bureaucratic infighting that has too often played out in public view, the loudest and leakiest participants in this interagency dispute have now prevailed in blocking any release of these emails,” said campaign spokesman Brian Fallon.

Calling for the release of the allegedly top secret emails is a smart gambit by the Clinton folks since it makes them look as if they have nothing to hide while being protected by the near-certainty that the State Department won’t simply change its mind on the release because the Clinton team asked them to.

This wasn’t any kind of “pivot.”  Secretary Clinton has been saying for almost a full year that she wants the emails released (presumably to the extent that release would not jeopardize national security): 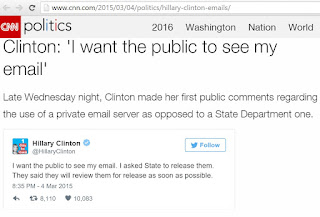 State Department spokesman John Kirby repeatedly reiterated on Friday that State had upgraded classification of the 22 emails “at the Intelligence Community’s request.”  That sounds like simple interagency comity.  It’s too much of a stretch from there to declaring that the State Department made some kind of important, revelatory, independent determination regarding the proper classification.