No, Dianne Feinstein Is NOT Trying to Take Veterans' Guns 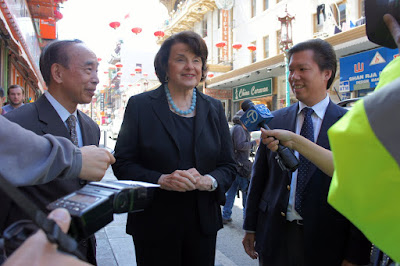 
I love many things about modern technology.  The ease with which we can share information is absolutely amazing!  But that means it's also very easy for folks to share FALSE information.

For example, the following misinfographic ... which is a load of baloney.


​​
Graphic altered to prevent further circulation of its nonsense.  Original had "Idiot" at the top and the fabricated quote at the bottom.

U.S. Senator Dianne Feinstein (D-CA) NEVER uttered these words, and sure as heck doesn't even think it.

After further conversation with my Facebook friend who posted this, I've been able to figure out the origin of this meme.  He argued that "it's a paraphrase of what she said."

It isn't a paraphrase.  It's a complete fabrication.

So what did she *really* say?  According to FactCheck, Feinstein questioned whether a new and revised assault weapon ban (since the 90's ban had been allowed to expire) should include a *new* exception for retired military.  She merely expressed concern that those folks:
(a) who are veterans, AND
(b) who have active PTSD or other severe mental health disturbance
... should not be able to access assault weapons.

That position is not remotely the same thing as allegedly saying that all U.S. veterans are mental incompetents whose guns should be taken away.
THE ACTUAL FEINSTEIN QUOTE:

"The problem with expanding this is that, you know, with the advent of PTSD, which I think is a new phenomenon as a product of the Iraq War, it’s not clear how the seller or transferrer of a firearm covered by this bill would verify that an individual was a member, or a veteran, and that there was no impairment of that individual with respect to having a weapon like this.

So, you know, I would be happy to sit down with you again and see if we could work something out but I think we have to– if you’re going to do this — find a way that veterans who are incapacitated for one reason or another mentally don’t have access to this kind of weapon."
END QUOTE

If anything, I find most concerning her apparent belief that PTSD is "a new phenomenon as a product of the Iraq War."  I've struggled with PTSD for almost 30 years due to traumatic abuse in early childhood (long before the Iraq War, which I had no part in - asthma kept me out of the military.)  And I've known plenty of other folks with it, including veterans of Vietnam, WWII, and Korea.  It's not a new phenomenon.  It's just something we're increasingly able to better understand.  Hopefully the Senator has already had that matter clarified in the few years since she made the comments above.  But that's a different topic for a different time.

So, no, Senator Diane Feinstein is NOT trying to deprive all veterans of their guns.  And she does NOT think all vets are mentally ill.
So the next time you see this graphic, please speak up and correct the record.  If you can't manage that, at the very least, please resist the urge to share it on yourself.
Posted by Unknown at 6:05 PM