Conservative talk radio host Laura Ingraham was capital M-A-D - MAD - at George W. Bush on her radio show Tuesday morning.  A good part of her commentary came right from this piece she wrote, then went well beyond.

Here are some excerpts from her piece, good chunks of which she seemed to read verbatim on her radio show: 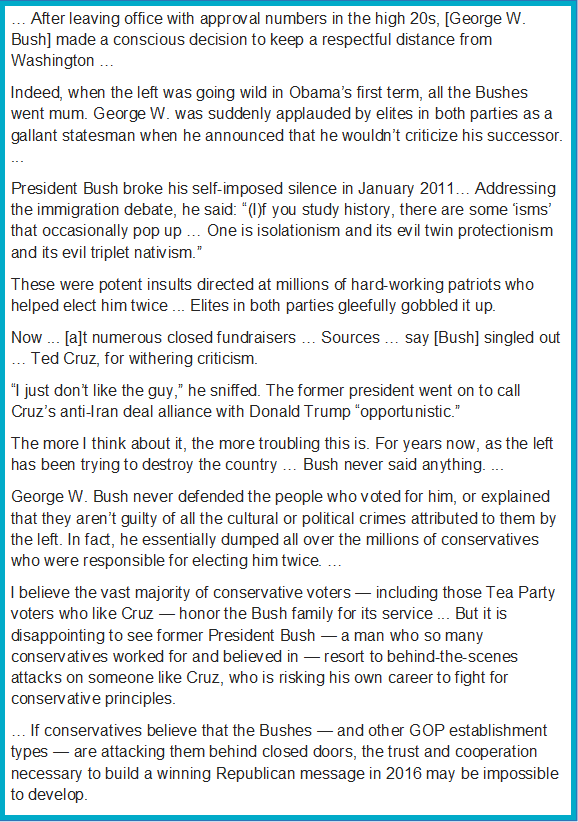 As the hours passed after publishing this article, she apparently grew more perturbed by “the establishment GOP,” the Bush family’s place in it, and the establishment’s supposed disrespect for grassroots GOP folks like the Tea Partiers. [Note 1.] And by show time, she was tearing into her party’s last two-term President on her nationally syndicated radio show.

She declared concern that the “establishment GOP’s” positions left the Party vulnerable to being perceived as the party of the US Chamber of Commerce and the elite.  Okay.  That’s fair enough criticism, and falls within the normal bounds of intra-party critique.

But then she accused Bush 2.0 – and the rest of them – of finding Tea Partiers distasteful and embarrassing.  And she accused him of repeatedly betraying true conservativism by remaining silent about Democrats “going wild” and now only speaking up to criticize Ted Cruz.  [Note 2.]

Her choicest words seem to come at the end of the segment:

A few things didn’t seem to factor into Ingraham’s calculus, because both should have tempered her outrage at least somewhat.  First is that a former President criticizing the competition in support of family running for office isn’t exactly a surprising dynamic (Hello, Bill Clinton circa 2008!)

The Dallas Morning News wrote of the book: “Not getting the big job he’d hoped for with Bush turned out to be a blessing, [Cruz] writes. Not only did the setback give him a needed dose of humility; it spared him from becoming ‘enmeshed in the many ill-fated decisions of the administration.’”  He also apparently went hard at both the Bush Administration and Jeb on Charlie Rose in July, too, and made similar comments on NPR:

So perhaps Bush 2.0’s distaste for Cruz was driven not by a desire to help Jeb, nor by some elitist disdain for “real” conservatives, but by anger and disappointment at having been publicly attacked by someone whose career he’d personally helped along.

The background here: After two years of judicial clerkships and two years at a big law firm, the Bush 2000 team hired Cruz as a domestic policy advisor in 1999.  Cruz was part of the Bush Florida recount legal team, then spent two years working in the Bush Administration as an AAG at Justice and deputy policy director at the Federal Trade Commission.  He went back to Texas in 2003 to serve as the state’s Solicitor General.  True, Cruz had built an exceptional academic and early practice career on his own, but his entry into politics certainly owes some debt to George W. Bush.

So given all of that background, is it all that surprising that the former President might – at a private fundraiser for his brother – be pretty rough on Cruz in particular?

Note that in the second passage, it’s unclear whether the donor was referring to things that Bush 2.0 had specifically said, or was instead providing their own thoughts about what might be motivating Bush’s dislike for Cruz.

Perhaps the ultimate irony of the whole scuffle?  Cruz is now trying to claim the high ground.

It’s terrific that Ted Cruz won't reciprocate and all.  But seeing as he started the whole thing by repeatedly dragging W’s record through the mud, Cruz isn’t exactly an innocent target of the conservative-hating, big, bad, Bush Family political machine.

Perhaps with a bit of time and some reflection, Ingraham will reassess her comments.  Will she decide that maybe the Bushes don’t revile conservatives more than liberals?  That perhaps she needn’t be disgusted by her party’s last two-term President?

Only time will tell.

** Note 1: This tack is interesting, because Ingraham has always struck me as thoroughly establishment herself.  I do have to admit to not having read or heard a lot from her in the past few years, so maybe her views changed over time.  Or maybe she went where her ratings and book sales would be optimized.  If so, it seems to be working – she just turned up in the Portland, Oregon AM radio market.  That might be worth taking a look at some time.

** Note 2: This section is to the best of my recall – I couldn’t find a transcript of the show while writing this.  I finally found streaming audio, but it was some Augusta, GA station’s live feed and I came in at the last few minutes of the segment.  The quotes come from that last bit, and were rapidly transcribed as best I could since I couldn’t rewind to confirm.  I also recall her attacking a number of aspects of Bush 2.0’s record in office, but don’t recall the specifics [it was during my barely-awake early AM drive to school. =)]
Posted by Unknown at 10:20 PM