Hillary 2016 campaign operatives have said some unfortunate things to reporters this year at the expense of their candidate.  And on yesterday's episode of With All Due Respect, Communications Director Jennifer Palmieri says a mouthful around minutes 17:40:

PALMIERI: The elements are all there of campaigning like a normal person.  A lot of contact with voters, a lot of one on one time with voters, big town halls, you see her answering a lot of questions.  She loves all that.  Um, a lot of interviews, as well, a lot of local, and national.

Most of Palmieri's response is fine.  And, granted, it was probably phrased to echo the question she was asked.  But friendly fire still wounds.

From the cheap seats out here in Oregon, it seems that Hillary's staff should avoid uttering any phrase asserting that Clinton is behaving like a normal person.  This is as painfully obvious as was the ill-advised nature of telegraphing to a New York Times reporter that the campaign was planning to become more spontaneous and more focused on Hillary's heart and humor.

Here's one suggestion: an outright ban on the phrases "normal person," "regular people," "average Americans," "ordinary folks" - or any variation on these - would be well advised for the Clinton campaign.  Basically, if a phrase can (and will) be twisted by right-wing punditry into further "evidence" to support their unflattering narratives about Clinton and/or "liberal elitists," it shouldn't be coming from campaign staff mouths.  Ever.

Here are some examples of good and bad phrases:

BAD coming from Clinton or her staff:
> Hillary cares about regular people
> She's out there meeting with average Americans every day

GOOD coming from Clinton or her staff:
> Like most other American moms, Hillary is very concerned about gun violence in our schools
> Every day, middle class families talk with us about their struggles to _______, about the real issues impacting their lives. __________ [Whatever frivolity has driven media the prior 48 hours] isn't on that list.

The Media is Neither Your Friend Nor Your Enemy. Proceed Accordingly.


Clinton campaign staffers seem to have a weakness for communicating with reporters - whether on the record or on background - in a knowing, chummy way.  Her campaign is far from the first thus plagued.  Politics tends to draw - and reward - folks with out-sized egos and an even more out-sized capacity for self-promotion.

Palmieri's verbal slip, on the other hand, seemed a product of flack-think.  As in any other profession (medicine, law, mortuary science), political flacks sometimes chat amongst themselves in a jaded fashion that can be off-putting to folks outside the profession.

So staff and strategists sometimes talk about their candidates like they're a brand of detergent or family sedan that they're seeking to improve market share for.  Yes, PR campaigns for candidates and consumer goods do share some similarities.  But advisors' detached marketing talk about someone running for public office doesn't go over well with us normal people out here beyond the Beltway.  It doesn't leave the candidate sounding warm, accessible, or even human.

Staff positioning talk also often furthers a public impression that the candidate lacks principle.  Staff can continually emphasize that they're just trying to better highlight the candidate's actual strengths, as many Clinton staffers did in the New York Times planned spontaneity story.  But those caveats gets lost in the translation.  If a story has a click-worthy hook, far more voters will hear about it second-hand from late night TV, talking heads, Twitter, and Facebook than will ever actually read it.

In modern media, sensation is often more desirable than substance.  A reporter's strength lies in part in their ability to build rapport with candidates and staff and get them to let their guard down and say something click-worthy.  Mark Halperin is pretty dang good at this, to be sure.

So even though campaign staff speak in such terms amongst themselves, and reporters and pundits do the same, the twain probably shouldn't meet.  At least not during a campaign that staff actually want to win.

Here's the Campaign's Message. Now Stick to It.

Back in that infamous New York Times article of about a month ago, Amy Chozick reported: 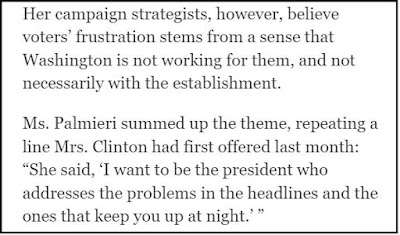 That's the seed of a terrific message.  With a bit of refinement, it could be a winner.  If Hillary's campaign can just see clear to stay on message, their candidate may yet win.  Otherwise, this could be the second HRC presidential campaign that snatches defeat from the jaws of victory.