You're right - that headline doesn't make sense.  But neither do a couple of stories and at least one headline that essentially made that very assertion yesterday. 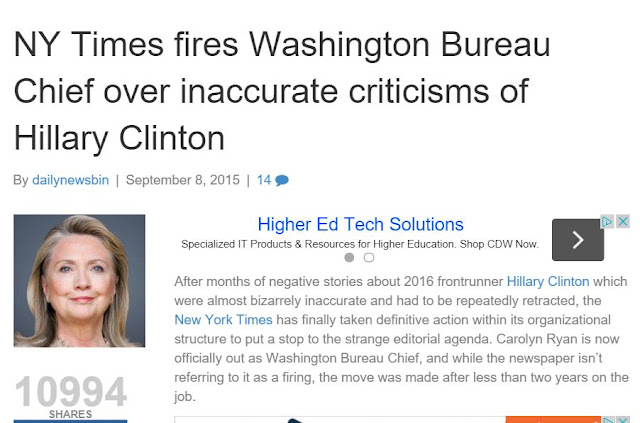 This Daily Newsbin article is a good example of why you shouldn't believe everything you read, especially in the modern hypermedia age.  Anybody with a device and a data connection can now publish any old wild speculation that jumps into their heads, where it can often find an audience eager to further disseminate it.  This story has almost 11,000 shares already, and it just went up yesterday.

I read the New York Times' statement about editorial personnel changes in the Washington Bureau yesterday.  Newsbin’s assertion that Carolyn Ryan was “fire[d] … over inaccurate criticisms of Hillary Clinton” is odd and completely illogical.


The mundane fact of the matter is that the Times simply decided to once again vest the positions of Political Editor and Washington Bureau Chief in two different folks - Carolyn Ryan had been doing both for a bit less than two years.

This restructuring has been in the works for months.  Dylan Byers of Politico reported in January that Ryan had put Elisabeth Bumiller, her deputy Washington Bureau chief, in charge of the bureau's day-to-day operations.  By that point, the speed and volume of news being generated by the 2016 Presidential race really demanded that the Times’ political editor primarily operate out of New York rather than DC.

Ryan wasn't “fired” for supposedly bungled coverage of the Clinton campaign, stories which would have been within the purview of her role as political editor.  Caroline Ryan stays in the position of senior political editor, which has a lot more to do with coverage of the Presidential campaigns than does the Washington Bureau.  Elisabeth Bumiller is becoming the new WA Bureau chief, in what seems to be a formalization of a delegation of authority put into motion back in January.

Media Matters also ran with this “editorial restructuring is an indictment of the Times’ Hillary Clinton coverage” spin – their post has been shared 1,800 times: 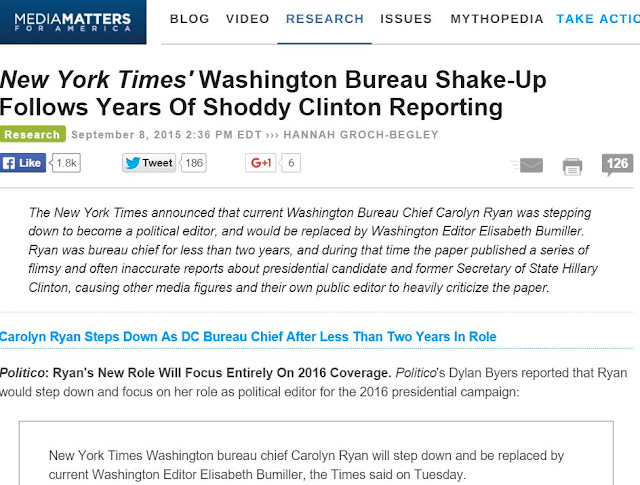 Politico similarly had a misleadingly breathless headline on their coverage yesterday:

I fear marketing has taken over too many news sites’ headline writing.  Those attempting to serve as reputable, credible news sources should really consider shooing the marketing folks on out of there.  The headline was undermined by Dylan Byers’ actual story, which indicated that this was anything but a “shakeup”:

“The change, which was announced by executive editor Dean Baquet, reflects the longstanding editorial arrangement that existed in everything but name, several Times sources said. Bumiller had served as the de facto bureau chief while Ryan, who also serves as political editor, had focused on the paper's 2016 coverage.”

Were there problems with the Times’ coverage of the email story?  Yes.  Is the Times sometimes harder on Clinton than on other candidates?  Perhaps.  But do those facts, plus the formalization of editorial redelegation of authority that first occurred several months ago, equal “Carolyn Ryan FIRED for failings as political editor?”  Seeing as she’s actually remaining in the position of political editor, I’m going to say that’s a no.

Trust the interwebs to vest a pedestrian story with all sorts of political significance that not only isn’t indicated, but is counter-indicated by all available data.
Posted by Unknown at 2:39 PM