Chris Cillizza of The Washington Post shared a chart today from Republican lobbyist Bruce Mehlman, purporting to highlight the existence of TWO AMERICAS: 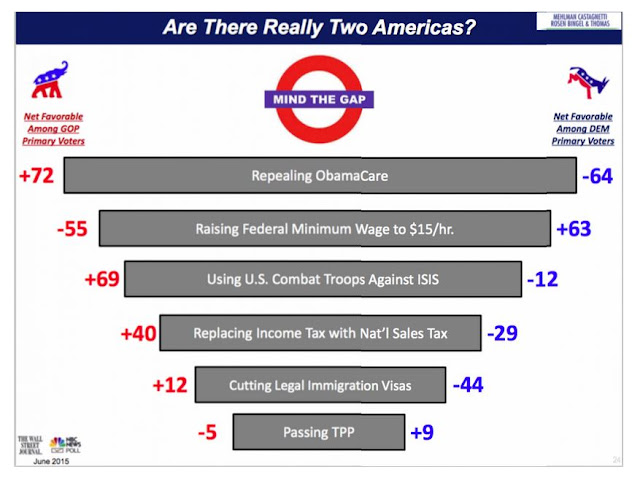 This "dichotomy" isn't wearing any clothes.

The table only purports to show the difference in opinion between GOP primary voters and Democratic primary voters.  Those folks are a very small part of the American citizenry.

Cillizza, Mehlman, and others so enraptured with the “Two Americas” narrative that they’re cramming these polling figures into it are forgetting about 72.3% of our voting-age citizenry.

When it came to the November General Election, 15 million registered voters didn’t vote (same, p. 14.)  Another 30 million weren’t registered to vote at all (same.)

I don't think that primary voters are representative of the (potential or actual) American electorate as a whole, nor does anyone who seriously studies these things.   [MORE ...]


But people - especially political consultants and the commentariat - love to parcel Americans out into demographic groups.  So in the interest of helping divvy Americans into semi-distinct ideological groupings identified as "Americas," here are ...

Americas Three through Ten
(as I currently conceive of them)

3. The 88.9% of GOP voters who DON'T participate in the presidential nominating process  (Harvard)

4. The 81% of Dem voters who DON'T participate in the presidential nominating process (Harvard)

7. The folks firmly in the middle, who actually do tend to vote for BOTH Dem and GOP candidates


8. The folks somewhere in the middle, who are so turned off by politics that they either don't participate or participate rarely in elections:
> About 56% of the 30 million unregistered voting-age citizens said they weren't registered because they weren’t interested in politics or candidates/issues on the ballot, didn’t think their vote would make a difference, or didn’t know or refused to answer why they weren’t registered (Census Bureau, p. 14)
> About 33% of the 15 million who were registered but didn’t vote in the November election said it was because they weren’t interested, didn’t like the candidates or issues, or didn’t know or refused to answer why they didn’t vote (same source.)


9. Radical folks on the right who don't participate
> Just 53.1% of voting age citizen Utahns and 56.1% of such Texans voted in the November 2008 General Election (Census Bureau, p. 8.)  I suspect these low numbers are due in part to radical right opting-out, but a majority of these states’ non-voting folks likely fall in groups 3 through 8.

10. Radical folks on the left who don't participate
> Just 51.8% of voting-age US citizens in Hawaii voted in November 2008 – perhaps this could be somewhat due to radical left opting-out? (same source)

Okay, Ten or More Americas isn’t as tidy a sorting system as Two Americas.  Nor does it create that fun, Hatfield vs. McCoys, us vs. them dichotomy that lends itself to dramatic pronouncements about further evidence of the polarization of America.  But it does provide a much richer – and MUCH more accurate – picture of the American people and our politics.