Gun Down Illegals - AND Get Paid For It!

I'm not loving this ad for US border patrol agents that I stumbled across yesterday.

While reading the Washington Post, this ad sprung up: 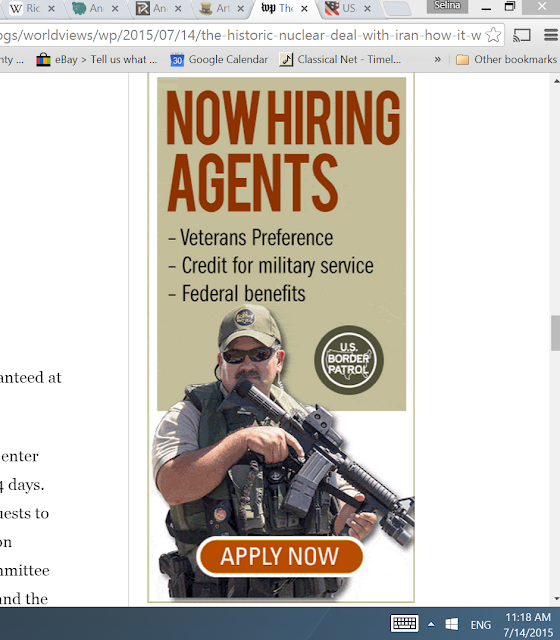 "Huh?"  I thought.  It would be strange if our government is recruiting folks for border control with an ad that seems to be saying, "Wanna gun down illegals tryin' to sneak across our borders?  You can - AND get paid for it! (PLUS Federal benefits!)"

Well, maybe, I thought, it's one of those ads that links to a for-profit company that promises to help users land a job with the federal government. Or maybe it's from a for-profit site that somehow makes money as little more than a portal to government job sites.  I've seen plenty of ads for outfits like that.

So I clicked on the ad.  And landed squarely at USAJobs.gov - our federal government's own job listing site. 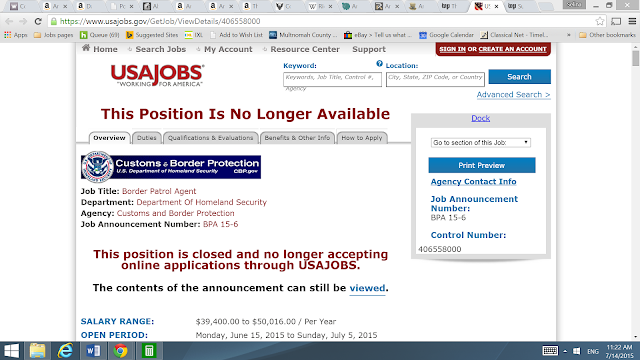 Interestingly, the application period for this announcement had ended nine days prior - so not only were we (since our government represents all of us) running an obnoxious and ill-considered ad, but - BONUS! - we were wasting taxpayer money while we were at it.

Yes, I understand that the potential excitement of fighting real bad guys (not to be confused with, say, Guatemalan women and children on the final leg of a journey to seek asylum in the US - whether with sufficient legal cause or not) is something that attracts at least some folks to law enforcement.  But that's not a picture of a guy engaged in actively fighting homicidal drug runners.  He's just standing around, rather awkwardly holding a really big automatic weapon (if it's semi-auto, correct me - I really don't know guns.)

Did they focus group this thing? Did it appeal to more folks than some other potential ads and images?  Whatever demographic that particular ad was found to appeal to, I'm pretty sure we don't really want them patrolling our borders.

While writing this, I went back to USAJobs.gov to verify that the site and related advertising fall within the purview of the Office of Personnel Management (it does) and saw another ad for border patrol agents: 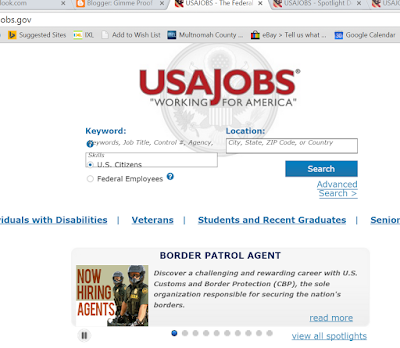 That's better - they're still trying to appeal to the thrill-seeking demographic, but more in a Vin Deisel racing-around-on-motorcycles kinda way than in a Rambo gun-'em-all-down-and-let-God-sort-'em-out kinda way.

I clicked through and found that a new application period had opened on July 13 (the day before yesterday, about a week after the prior one closed), so the money-wasting aspect of yesterday's ad was probably more due to an admin's error (failure to update the link) than egregious frittering away of tax dollars.  So at least that's a relief.

As for the original ad, maybe OPM's PR/internet advertising arm could do a better job of ensuring that their advertising will attract folks with the required qualifications listed for a job, as well as avoid attracting people who are likely to lack the sound judgment and steady temperament most of us want in our law enforcement officers.