“The Supreme Court is completely out of control, making laws on their own, and has become a public opinion poll instead of a judicial body,” the 2016 contender said in a statement.  “If we want to save some money, let’s just get rid of the court,” Jindal added.

Obliterating one of the three co-equal branches of our government is a great idea.

You know, because that urge comes from a well-spring of solemn reverence and love for our great Constitution.  The same Constitution that established our then-unique system of checks and balances.

His campaign will likely back-pedal, claiming it was just an amusing throw-away line.  But it was more than that.  It was feigned ignorance about how our government functions - straight-up pandering to the angry, anti-egghead wing of the GOP.

And it gets better.  The story hit international press around 15 hours ago.   Here it is on the site for Mumbai, India newspaper dna: 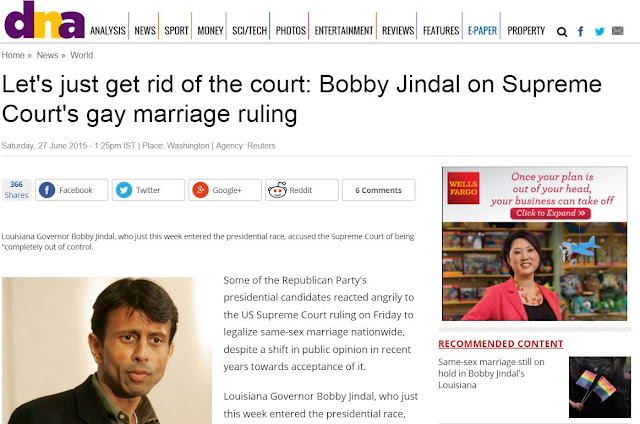 Am I the only one who, upon seeing that headline on an Indian news site, immediately imagines tens of thousands of Indian mothers around the world cringing at Gov. Bobby Jindal acting like he's ignorant and uneducated?  And then chewing him out for it? [...]

As a GOP Presidential candidate, Gov. Jindal could enjoy a bunch of that favorite son, national pride, adoration abroad that both JFK and Obama got as descendants of emigrants (and c'mon, doesn't that look like a lot of fun?)  He's actually one of the most exceptionally bright, well-educated (younger) men in national politics today.  At least, he was a dozen years ago.

A graduate of Brown University and former Rhodes Scholar, Jindal knows full well that what he's saying is completely ridiculous.  He could make use of his impressive education, propose well-considered, interesting solutions to America's most pressing challenges, and contribute to constructive debate.

Instead, Jindal's just doing his best to battle Mike Huckabee and (as a friend reminded me) fellow Ivy Leaguer Ted Cruz for the "Panderer of the Year" crown.  No, they're not the only candidates who play around with absurd rhetoric and "proposals."  But these three are obviously intelligent and informed enough to know that they're uttering way too much ridiculous nonsense.  They know their statements are silly, but they do it anyway to score political points.  [FN 1]  The jury's still out on some of the others.

But there’s one major difference between Jindal and Huckabee: because of shared heritage, millions of people around the world are actually paying attention to what Jindal's saying. 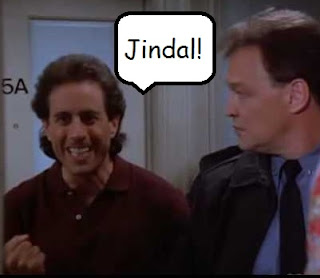 And as a fellow life-long nerd, let me also say:  Way to sell out our people, Jindal.  =/

Bobby Jindal, you still have ALL sorts of opportunity to turn things around and at least attempt to run an ideas-based campaign that capitalizes on YOUR unique strengths.

I’m not a GOP voter, but I know more than a few folks who are.  Change course, and you’ll find that there's actually a significant contingent within your party’s tent who’d respond favorably to a more authentic, and more thoughtful, campaign.  And it’d sure do better for America’s image abroad than the angry, “anti-egghead” pantomime you’re currently performing.  It's up to you.

FN 1: I address Gov. Jindal by last name rather than title not as a sign of disrespect, but because he’s a fellow Gen X’er just two years my senior.  In that and in some other respects (mainly the nerd thing), he’s a peer – albeit an eminently more accomplished one.  Plus just calling him Jindal sounds more like Jerry Seinfeld griping about, “NEWMAN,” an effect I enjoy.

FN 2:  This may also be true of Cruz, but let’s save him for another day.  I’m still unsure whether Cruz’s crazy stuff stems from being a radical ideologue/true believer, or whether it’s because he’s a cynical, opportunist snake oil salesman.  If you feel confident it’s the latter, feel free to add “and Cruz” to every mention of Jindal throughout.